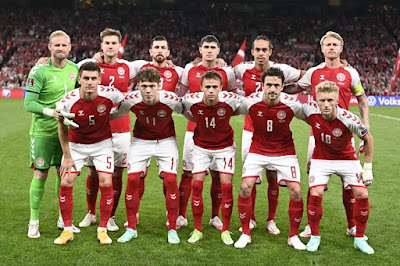 The 2022 World Cup qualification has not yet been fully completed, but there are already two countries that have confirmed themselves to qualify for the finals. The two teams are both from the European zone, namely Germany and Denmark. The German national team confirmed the Qatar 2022 World Cup tickets first on Tuesday (12/10/2021) early in the morning WIB. The certainty was obtained after Der Panzer won 4-0 over North Macedonia at the Toshe Proeski Stadium.

With only two games remaining, the German national team is unlikely to drop from the top of the standings. For Germany, this is the 20th time they have appeared in the World Cup finals. They have not been absent since 1954. Die Mannschaft's best achievement in the World Cup is winning four times, namely in 1954, 1974, 1990 and 2014. After Germany qualified for the 2022 World Cup finals, Denmark followed later a day later.

Denmark ensured an automatic ticket to Qatar 2022 through a 1-0 win over Austria at the Parken Stadium, Wednesday (13/10/2021) early morning hrs.

The only goal of Team Dynamite in that match was scored by Joakim Maehle (53'). Denmark are currently collecting perfect points, 24, from their eight matches in Group F. They are also firmly at the top of Group F and seven points clear of Scotland, who are trailing in second place. Denmark's position is unlikely to change anymore because there are only two matches remaining in Group F of the 2022 World Cup Qualifiers in the European Zone. For Denmark, this is the sixth time they have qualified for the World Cup finals after the 1986, 1998, 2002, 2010 and 2018 editions. For information, only the winners from each group (AJ) can qualify automatically for the 2022 World Cup from the region. Europe. Meanwhile, the runners-up of the European Zone World Cup Qualification group will undergo the play-off round.