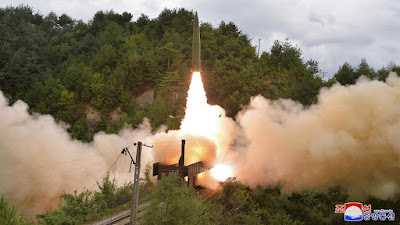 Riviere said there was consensus among the groups to condemn the test.

"Everyone is very concerned about this situation," de Riviere told reporters after the 45-minute meeting.

"This is a grave threat to peace and security, this is a clear violation of Council resolutions," he added, saying the missile had fallen within Japan's exclusive economic zone.

The missile fired by North Korea was a test of a missile system designed as a potential counterattack for any force that threatens the country, the Korean Central News Agency (KCNA) reported on Thursday (16/9).

The missile flew 800 km (497 miles) before "striking the target" in the sea off North Korea's east coast on Wednesday, KCNA said.

On Wednesday, South Korean and Japanese authorities said they had detected the launch of two ballistic missiles from North Korea, just days after testing a long-range cruise missile that analysts say could have nuclear capability.

In a statement from London, the UK Foreign Office condemned the test as a "blatant violation" of Security Council resolutions and a "threat to regional peace and security," as did the United States.

"We urge North Korea to refrain from further provocations, and to resume dialogue with the US," the British statement said.