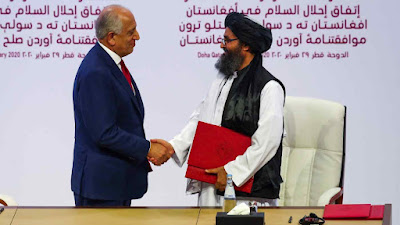 The Taliban movement, often referred to simply as the Taliban or the Taleban (Persian and Pashtun البان; from Arabic plural: الب ālib, "disciple"), whose members refer to its organization officially as the Islamic Emirate of Afghanistan, is a Pashtun-supported Deobandi Islamic nationalist movement that effectively controlled almost all of Afghanistan from 1996 to 2001 and returned to control Afghanistan in 2021. Currently, the Taliban is one of two political entities that both claim to be the legitimate government of Afghanistan as well as the Republican side. Several countries and international organizations branded this movement as a terrorist organization.

The Taliban group was formed in September 1994, with support from the United States and Pakistan. The UN Security Council condemned the group's actions for its crimes against Iranian and Afghan citizens. The Taliban commit various acts of human rights violations in Afghanistan.

The group has diplomatic recognition from only three countries: the United Arab Emirates, Pakistan and Saudi Arabia, as well as the government of the unrecognized Chechen Republic of Ichkeria. The most influential members of the Taliban, including Mullah Mohammed Omar, the leader of the movement, are village mullahs (junior students of the Islamic religion), most of whom study at madrassas in Pakistan. The movement originates mainly from Pashtuns in Afghanistan, as well as the Khyber Pakhtunkhwa Province in Pakistan, and also includes many volunteers from Arabia, Eurasia and South Asia.

The Taliban government was overthrown by the United States for being accused of protecting Al Qaeda leader Osama Bin Laden, who Washington also accused of masterminding the attack on the twin towers of the WTC, New York on September 11, 2001 in collaboration with the Northern Alliance.[60] This invasion began in October to November 2001 with a surprise that the Taliban immediately came out of the Afghan capital, Kabul so that the Americans were relatively quick and easy to control. Since 2001, American and allied forces such as the United Kingdom and Germany have begun occupying Afghanistan to crush the Taliban and help maintain the country's security.

In May 2021, US troops and their allies began to gradually withdraw from Afghanistan. Because of the troop withdrawal, the Taliban again rebelled against the Afghan government. This rebellion resulted in hundreds to thousands of Afghans having to flee to the capital Kabul. Some of them have fled abroad, especially to Iran, Turkey and European countries.

In connection with the insurgency, President Joe Biden again deployed about 3,000 US military personnel to cooperate with the Afghan military against the Taliban. Reserve troops are also on standby in nearby countries such as Kuwait, Saudi Arabia and Qatar.

As of August 13, 2021, the Taliban had controlled ten areas of Afghanistan in the span of six days. Major cities such as Kandahar, Herat and Jalalabad have fallen to the Taliban.

By August 15, 2021, the Taliban had besieged the Kabul area and were negotiating with the Afghan government on a peaceful transfer of power. As a result of the siege, President Ashraf Ghani and several US diplomats in Afghanistan were immediately evacuated and left Afghanistan.