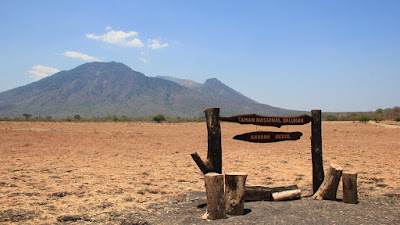 Baluran National Park is a nature conservation area that has native ecosystems managed with a zoning system that is used for research, scientific, educational purposes, to support cultivation, tourism and recreation.

The management of Baluran National Park is carried out based on the principles of conservation of living natural resources and their ecosystems as stipulated in Law Number 5 of 1990 concerning KSDAHE and Law No. 41 of 1999 concerning Forestry through three Ps, namely:

The work to eradicate the prickly acacia plant or Acacia nilotica in Baluran National Park, East Java, will not end this year. Or maybe ten, twenty years from now.

Acacia muzzles the natural savanna of Baluran. The last bastion of endangered mammals, apart from the Javan banteng, Baluran is home to 155 bird species and 25 other mammal species. Acacia is in fact too easy to grow.

When dry, acacia seeds easily fly with the wind. Not to mention the seeds that are scattered through the feces of the animals that eat them.

The purpose of planting Acacia nilotica, 47 years ago, was as a fire fence. Prevent the spread of the Bekol savanna fire to the surrounding seasonal forest.

Initially, planting thorny acacia from Africa was considered an ideal solution to prevent the spread of fires, aka fire breaks. However, the fire solution step turned into a disaster.

Acacia began to colonize the savanna area. From an area of ​​10 thousand hectares, now there are 3,000 to 4,000 hectares of savanna.

The action of saving the savanna ecosystem in Baluran which continues to be displaced due to the massive growth of acacia is not an easy job. Acacia can be called the eternal enemy of baluran.

The savanna exoticism of Baluran National Park, East Java, is felt on the other side of the acacia logging site.

The 25 thousand hectare national park, at the tip of the island of Java, is not only a magnet for tourists and researchers. Specialty hobbyists also have an interest in Baluran.

Baluran literally means a high place. During the dry season, the temperature reaches 40 degrees Celsius. The expanse of savanna, wildlife and the scorching sun makes its charm worthy of being called Africa van Java.

Data in 1992, there were 338 wild bulls, but it fell sharply until 2012 when only 26 wild bulls were detected. Even the search for wild bulls during the day was fruitless.

Exploring Baluran is like opening a curtain of heaven. The animals are present like a gathering. The encounter with hundreds of Cervus timorensis or Timor deer proves how strong the bonds between the inhabitants of this park are.

The opportunity to meet animals, is more open if done at night. The lack of bull encounters during the day, raises a speculation. Bulls turn into animals that are more active at night or nocturnal.

The lack of literature and research on banteng has intrigued baluran managers to observe firsthand the behavior of banteng in tree houses. The allegation that bulls change their behavior remains to be proven. And a camera trap proves the existence of a bull here.

The declining banteng population has made the World Conservation Agency set it to be in the endangered conservation status twenty years ago.

Even the distribution of the banteng, which is thought to have filled the mainland of Southeast Asia, has been declared extinct in India and Brunei Darussalam.

An encounter with a coyote or coyote reinforces the presence of a threat to the banteng. One of the bull predators. Although relatively small, a group of invites is able to knock down an adult bull.